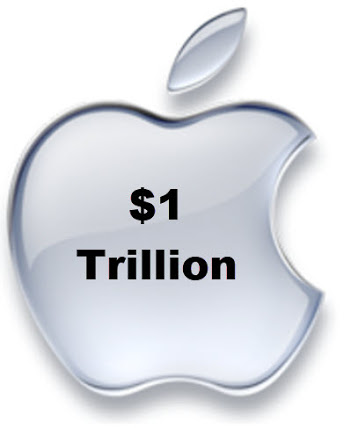 Apple Inc. is the first world’s Tech giant company to hit $1trillion in its market value.

The announcement was made on Thursday evening following a 2.9 percent rise of shares which closed at $207.39, propelling the market value to $1.002 trillion.

Apple’s growth and market value has consistently been on the rise right from the time of Steve Jobs to Tim Cook.

Apple’s worth was about $350 billion when Jobs died in 2011 but Tim Cook has led the creation of even more stock market value than his former boss and mentor.

The fantastic and monopolistic model on which Apple operates has made the giant company stand tall leaving competitors like Black Berry and Motorola in digital dust.

“Steve’s vision was grounded in the synergy between hardware products, software services and third party apps and media to make sure any customer would have everything they need without ever leaving the Apple ecosystem.” said Tony Fadell, who worked closely with Jobs to create the iPod digital music player.

And since then, Tim Cook has overseen the development of new key products, the iPhone X and Apple watch, and research on potential new categories like self driving cars and augmented reality masses.

This is an unprecedented feat for the tech company.