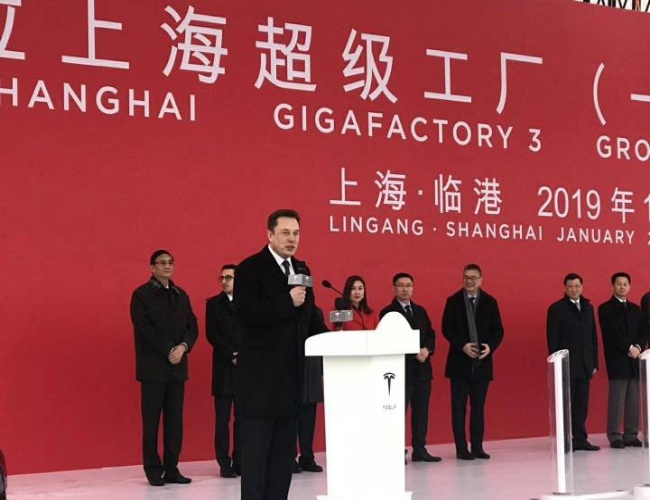 Elon Musk, CEO of Tesla, accomplished a groundbreaking ceremony on Monday in Shangai China, for the building of Tesla’s Gigafactory in China. This will establish a great inroad for Tesla’s cars into the Chinese market which is slippery to foreign investors.

Tesla plans to start making its Model 3 in this factory by the end of the year. Presently China is the world’s largest auto market, and Tesla wants to have a piece of the pie too, by localizing its production there.

Tesla’s CEO Elon Musk joined by the city’s Mayor Ying Yong and other local Government officials, performed the groundbreaking ceremony of the factory which is estimated at $2 Billion.

Musk: “We think with the resources here we can build the Shanghai Gigafactory in record time and we’re looking forward to hopefully having some initial production of the Model 3 towards the end of this year and achieving volume production next year,”

The factory is built amidst trade war between China and the U.S, which has affected the price of Tesla cars in China, further boosting the sales of locally made cars. The factory is China’s first fully foreign-owned car factory, which comes as a surprise too.

Shanghai Giga will produce affordable versions of 3/Y for greater China. All Model S/X & higher cost versions of Model 3/Y will still be built in US for WW market, incl China.

Recall that Tesla’s main Gigafactory, called Gigafactory 1 is located in Nevada, mainly to supply the battery packs for its electric vehicles and stationary storage systems. Its footprint is colossus.

The Tesla Gigafactory 2 is a photovoltaic cell factory, leased by Tesla subsidiary SolarCity in Buffalo, New York. The factory, owned by the State of New York, was built on a remediated brownfield site from a former steel mill. Construction on the factory started in 2014 and was completed in 2016–17.