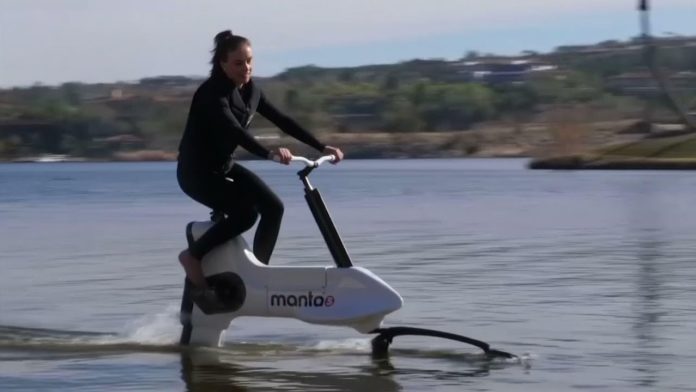 Water bicycle makes its debut at the CES technology show Las Vegas. Introducing a new way to get moving on water, with the help of muscle power and an electric energy.

The manta5 hydro foil ac1 is said to be the world’s first hydro filler electric bike. It utilizes e-bike technology to assist you as you’re plying in on the surface, and underneath, it uses hydro foils and propeller.

*The idea is to replicate the cyclic experience on water.

So, for the first five years of research, it was all manual according to CEO Greg Johnston. But they had to consider a wide range of users and this brought about “our first product is AC1 which allows for electric technology to assist you as you run very much like an e-bike” said CEO Greg Johnston.

However, there’s a bit of mastering involved in the learning curve. First part to learning is the launch, you might want to launch in the beach or pontin then moving into deeper waters where mastery is also involved.

This also looks quite exhausting going by the amount of energy required to cyclic the bike in water— exactly where mastery comes into play.

What do you think about the hydro foil electric bike?