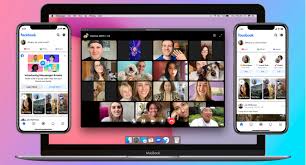 Facebook has launched Messenger rooms; Says it’s a new way to spend time with friends, family and fellow group members right from the Facebook Groups and Events you belong to.

“We’re launching Messenger Rooms, a new way to spend time with friends, family and fellow group members right from the Facebook Groups and Events you belong to.”

The social media giant says, since people are turning to technology and online to connect, it created the messenger room to make hanging out easy.

The messenger room has features including
joinable video links; private with extensive user controls; and fun with filters, games and screen-sharing.

Group admins and members can create a room right from the Facebook groups and Events they belong to. And host a video call of about 50 persons for as long as they want. Members can also add sharing links to make it easier to invite more people to their group; Even people who don’t have Facebook and Messenger.

With the group composer feature, members and groups can create a room. The groups composer will show active groups focused chat that people can join.

They can be many chat rooms per individual groups. And a maximum of 50 members including Admin.

Admins have the ability to allow messenger rooms within their group or make room “admin only”, so only admins can create, anyone can join. Or allow any person within the group to create a room.

However, Admins have the ability to delete any video chat room that violates it modus operandi.

Groups with posts approval by Admins cannot create rooms but without the post approval, any member can create rooms