Phone drops are inevitable. Everyone is a victim, the young, old, big, small at some point have had phone drop issues to deal with. This accidental and spontaneous action leaves you shocked, enclosed in your own world of uncertainty of whether or not you are going to lose your thousand dollar worth of phone that you probably just got. Suddenly the rush to reach for the phone, perhaps you would save it.

One of the qualities you look out for when making a phone buy is durability. You obviously won’t buy a phone that will not justify its budget. Most people can’t apparently go for fragile phones because they fear it will likely not survive the environment where they are, and sometimes due to carelessness. Whichever way, the “active damping” case is the saviour.

The “active damping” case synonymous with an airbag protects your phone from experiencing fall damage. It’s not some ugly protective shell that compromises your phone aesthetics but something that only deploys when your phone is in danger.

The “active damping” case is an activation mechanism whose sensors detect when your phone is in free fall and activate the protective set. The protective set is made up of eight thin metal curls that normally lie flat inside the case. But when released, they pop out and curl up, protecting the edges of the phone from impact and softening the blow considerably from a hard surface, keeping your phone safe from damage. 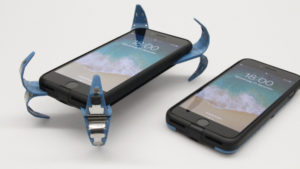 When you pick your phone, you simply fold the springs back into their holsters, getting them ready for their next deployment.

This invention is the brainchild of Philip Frenzel, an engineer at Aalen University in Germany. His idea won the top award from the German society of Mechatronics. He has already applied for a patent and printed T-shirts with exciting logo ready to hit the market soon.