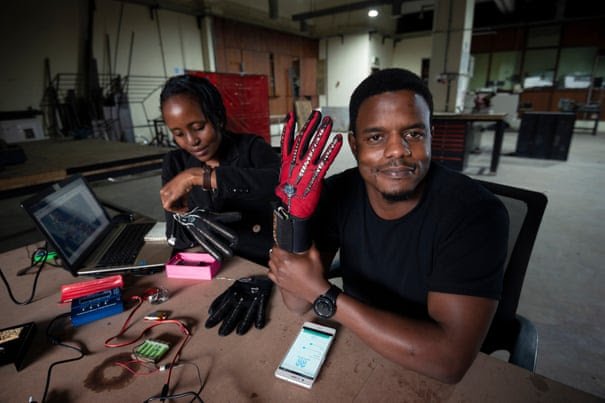 Communicating with the deaf and dumb can be quite exhausting and overwhelming due to lack of understanding. And this has made hearing impaired individuals feel all left out and alone caught up in their own world.

Roy Allela 25, a Kenyan, sets out to bridge the communication gap with a special technology (smart gloves) that uses a bluetooth enabled smartphone and a mobile app to decode sign language into audible speech.

Allela’s motivation was the burning passion to communicate with his six-year old niece who was born deaf. She was good at lips reading like all sign language users but he just couldn’t understand her.

The gloves are built with a high sensor that is able to read hand movements (signs), and transfers signals via bluetooth to the smartphone which translates the signals into audible speech through the mobile app called sign-IO which he also built.

“My niece wears the gloves, pairs them to her phone or mine, then starts signing and I’m able to understand what she’s saying.” Said Allela.

Also considering how people speak at different pace, Roy integrated setting the language, gender and pitch of the vocalisation through the app, with accuracy results averaging 93%, to accommodate everyone. “People speak at different speeds and it’s the same with people who sign – some are really fast, others are slow, so we integrated that into the mobile application so that it’s comfortable for anyone to use it,” he said.

In 2017, this ingenious invention won Roy the Hardware Trailblazer award from the prestigious American Society of Mechanical Engineers (ASME).

Allela’s goal is to place at least two pairs of gloves in every special needs school in Kenya, and believes they could be used to help the 34 million children worldwide who suffer disabling hearing loss.

The Kenyan technologist works for Intel and tutors data science at Oxford University.