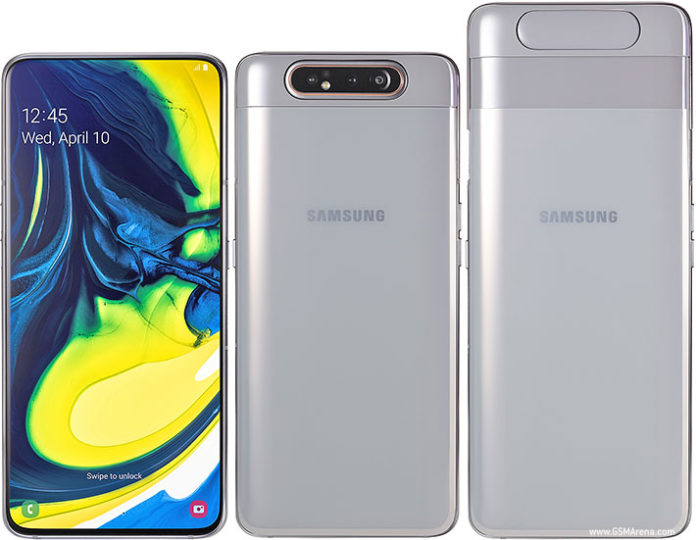 Just when people thought Samsung had gotten to its peak with the release of its latest flagships, It just slammed another release at the event in Bangkok. This time, a mid-range phone Samsung Galaxy A80 with impeccable designs you would want to know about.

Samsung Galaxy A80 was launched on April 2019. It operating system runs Android 9.0 (pie). The camera setting is obviously interesting. Both the main camera (triple) and selfie camera (triple) have motorized pop-up rotating module.

Play the t3chmate instagram video below to have a preview of what I’m talking about.

Making it certainly a done deal for photo lovers to take good quality pictures. Samsung has had a good reputation over time for producing good quality pictures. However, we understand that where there’s poor light reception, image quality is being affected. Except it has got a light adjustment feature in it.

Galaxy A80 has an internal memory of 128 GB, 8 GB RAM without a card slot for expanded storage. This may not sound too good for photo lovers, knowing that a 48MP  camera will produce images with large sizes thereby not making it possible to save as much pictures as desired

It battery is  non-removable Li-Po 3700 mAh battery. Fast battery charging of 25W. The a80 does not support wireless charging like the Galaxy S10 and S10 plus.

In conclusion, the Samsung Galaxy A80 is a somewhat special mid-range phone “A” line.