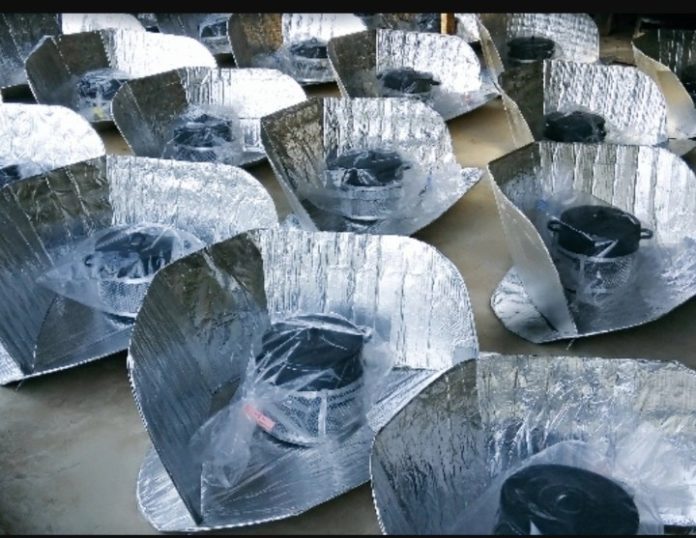 Africa as a black continent is enriched with extreme hot climate and weather condition that causes a mix of effects on the land. As a result, a young Nigerian, named Bassey Edem has invented a device that traps sun rays and uses it for heating of food.

As reported by Negroidhavens, Bassey Edem was motivated by the scourging sunshine and the joke “this sun can boil egg o” that went along with it. He began to research on how he could utilize the energy from the sun to cook food.

Edem started designing and constructing a Nigerian made solar cooker from local materials to replace firewood, kerosene and gas, owing not only to the fact that firewood, Kerosene and gas are being bought with money whereas, “the sun is a free gift from the Almighty, so you don’t spend money buying it each time you want to cook,” he said.

But to join the rest of the world in taking action steps to combat climate change and its impact, create sustainable energy for all, ensure healthy lives and promote well-being, end hunger as well as protect environment and biodiversity.

The basic principle used in his solar cooker technology is reflection and absorption. “The cookers are made of very high sun reflective material which attracts the energy from the sun and concentrates the energy at a particular angle onto the solar pot. The pot is enclosed in a heat trap. The heat trap ensures that the energy that comes in does not escape easily which helps in cooking the food while the pot stand suspends the pot a little above the cooker ground level – this ensures that the heated air is evenly distributed around the pot,” He explained.

“Now the solar pot is not your usual silver color pot, you can see that the pot is a bit thin in terms of the thickness and is black in color. This feature enhances energy absorption.” He continued.

How to cook with the solar cooker?

–You obviously need a sunny day! Set up your solar cooker outside your house, directly facing the sunlight.

–Ensure that you put your entire recipe in your pot and close the pot lid tight before placing it on the solar cooker. This is to avoid heat escape.

Solar cooking is not as efficient as its contemporaries; It solely depends on sunlight and adds extra 1 hour to cook your food. However it’s a good alternative in the following ways:

–It saves the cost of firewood, kerosene, charcoal, and gas.

–It reduces risk and impact of climate change -carbon emission from cooking
–It is safe, healthy and convenient
–It reduces other social challenges women and children face when going out to fetch firewood in the forest.

–It also reduces hunger among the most vulnerable that do not have money for firewood or charcoal that would have slept hunger.

Bassy Edem is a Nigerian, from Cross River State. Graduate of University of Technology, Electrical and Electronic Engineering.