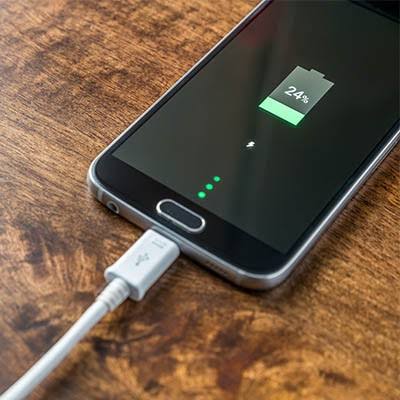 Charging your cellphone is what you do everyday, but are you doing it the right way? How much should you charge it? Should you leave it tucked in overnight? Should you let the battery go down to zero percent? Will your phone burst out at midnight because you over charged it? Don’t panic.

Let’s debunked some battery myths once and for all.

Charging my Smartphone overnight will overload the battery——FALSE

Smartphones are smart enough not to let that happen. Once the lithium ion battery reaches a 100%, charging stops. However, if you leave it plucked in all night, it’s going to use a bit of energy constantly trickling new juice to the battery every time it falls to 98%. That’s going to eat into your phone’s lifespan.

However, don’t worry too much about this; plug in your phone while you sleep. If you happen to wake up in the middle of the night, then unplug it. You can also plug it into a small plug and schedule it to turn off.

Now, the trickle charge can cause some heating up, many experts recommend taking the phone out of the case to charge overnight. At the very least, do not stack a bunch of stuff on top of your charging device. And just maybe for the love of Jobs, don’t sleep with it under your pillow.

If you’re afraid of fire, some in the UK recommend leaving the device in a dish or saucer while it’s plugged in.

I should freeze my phone to prevent battery problems —–FALSE

Repeatedly charging your phone in sub freezing temperatures can create a permanent plating of metallic lithium on the body anode. And heat is no better.

Your phone is a computer, and computer and heat are mortal enemies going back decades. Leaving your phone sitting in the sun while you work will throw you a warning that it needs to cool down. And please, don’t put it in the freezer, that’s just dump.

My battery should always drop to zero percent —-FALSE

Running your phone until it’s dead everytime is not the way to go with modern lithium ion batteries. Don’t even let it come close to zero percent. That’ll wear off the battery faster than normal. Batteries run borrowed time from the get-go. The inside are in a constant state of decay per time, they’re simply going to hold less and less power.

That was the problem back in the days of older nickel cadmium batteries. Today’s lithium ion batteries degrade and lose their capacity but not memory.

Fast charging makes corrosion happen even faster. So stop worrying about memories, if you’re going to charge overnight, just don’t fast charge. And of course if you plan to swap phones every year or two, charge anywhere you want, as often as you want.